After three weeks, our very first league – and our first Grand Archive event – has wrapped up, with a total of 55 matches played between 20 entrants! We want to thank everyone for participating and helping test out our bot. We found a few quality of life improvements that we made to ensure things run as smoothly as we can, and the feedback was awesome – we are really happy that people enjoyed the experience of casual play for prizes that we can bring to the digital table!

This event was utilizing the Grand Archive Prelude cards only, and games were played on TTS (as the game has not yet released). Players were allowed to change their decks freely between matches, but not inside matches, which were conducted as best two-out-of-three sets of games. 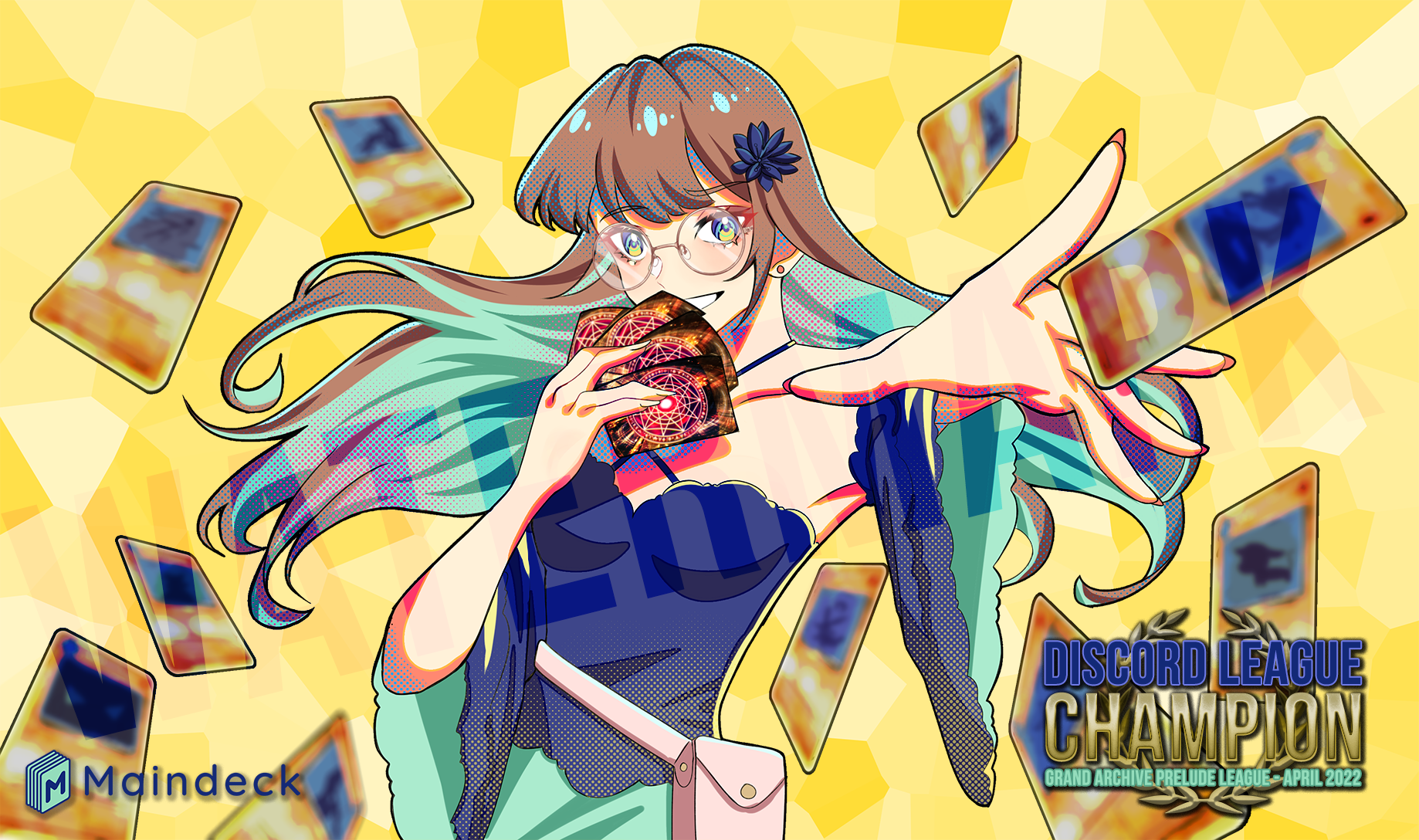 The league champion for this event was Jonsu#8629, who showed off his skills with a perfect record, even using multiple decks! The playmat above featuring our mascot Mae, and the very first Maindeck-exclusive playmat made – is his grand prize. Jonsu has kindly agreed to do a video with us talking about the league and his thoughts on Grand Archive, so stay tuned for that! But, before that, we wanted to provide everyone with a few select decklists and thoughts from the creators from the league, and of course, we are starting with Jonsu’s two Lorraine builds!

Jonsu provided a brief explanation of his gameplan in Lorraine: Much like you’d expect with any midrange-style TCG deck, the idea is to play cost efficient cards and keep an eye on the tempo of the game. With Lorraine specifically, where and how you go for the kill depends on your deck’s element and your draws in the game. With the Fire build, you have more burst and are able to push for wins before level 3 more often, while the Wind build plays more efficient spells and ways to protect allies to generate value over a longer game.

He notes that the key cards in his opinion are Dungeon Guide and Spirit Blade: Ghost Strike. Dungeon Guide can perform powerful Tempo plays in Lorraine thanks to leveling causing the new character level to be in the Awake state (in other words, you can attack with Lorraine level 2, then play Dungeon Guide, and attack again with Lorraine level 3), while Spirit Blade: Ghost Strike is an efficient attack that allows Lorraine to power to level 3 in your Materialize phase rather than Materializing weapons, and then banish them on Level 3 with Ghost Strike to power up Lorraine, Crux Knight’s‘s passive.

Though you may expect the aggressive Fire Deck to be the one slotting allies like Woodland Squirrels, it’s those actually only find a home in Jonsu’s Wind build, with the Fire build instead opting for Allies like Library Witch to generate advantage in Lorraine mirrors, and additional ways to deal direct damage.

Jonsu even slots a full playset of Creative Shock, despite not getting the class bonus from Lorraine. Creative Shock still gives Lorraine a Fast-speed way to set up cards for a powerful Rending Flames play, pitch a Floating Memory card for virtual advantage, or simply filter for cards in deck that edges slightly on combo to finish the game before reaching level 3 when possible.

Of course, Jonsu was not the only high performing player. With an ending score of 7-2, Discord member Tenryu brought out a slightly different take on Fire Lorraine.

In explaining the deck, Tenryu notes that this version was built to take advantage of the fact that Spirits only had 12 health in the version of the game utilized for this event. As of writing, the Level 0 Dawn of Ashes spirits have been bumped up to 15 health, making this list a lot less punchy as it’s incapable of a T2 kill. However, it’s been preserved here as an interesting artifact of its time. 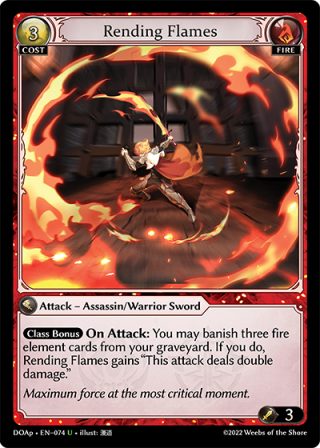 According to Tenryu, the ideal play is to win the die roll to go first, and in your first turn set up your graveyard to have 3 Fire cards with Creative Shock and by playing other Fire cards. The opponent materializes their Level 0 on their turn. On your second turn, the plan was to Materialize Lorraine, Wandering Warrior, use her On Enter effect to play Sword of Seeking, then attack with Rending Flames (using the Sword) for 8 damage, then Blazing Throw the Sword for 4 more to finish the game.

With the increase to the base health of level 0 spirits, Tenryu suspects the deck will need to pivot to focus on its slower gameplan, which involves leveraging more powerful allies like Banner Knight and attacks like Fiery Momentum, which they named as one of their surprise MVPs – when forced to go late, it would allow for game ending swings and it wasn’t unusual for it to hit up to 14 damage on its own!

We aren’t going to leave Rai players in the dark, either! While Lorraine seemed to be a popular deck, we have a couple of lists from our community for both element versions of Rai – Maindeck Community Leader Biefall, who went 5-4, shared his Fire Rai list with us, and community member Zynvolt racked up 2 match wins and shared their Wind Rai build.

Biefall’s Fire Rai contains a lot of what you’d expect, but he mentions that Endura, Scepter of Ignition was a card that he often felt very underwhelmed with and could see changing it out for something else. He notes that Rai suffered a bit in this format in general as the highly aggressive Fire Lorraine decks (like those above) could simply deal too much damage too quickly and the increase in health pools on early levels should help balance that a bit more.

Much like the Starter/Print and Play decks, the traditional Fire Rai is looking to hold off the opponent until he can enable a combo kill at level 3. Biefall packed plenty of Arcane cards to maximize Rai, Storm Seer‘s Level bonus and is clearly looking to enable a large combo turn with Arcane cards like Arcane Disposition and Reckless Conversion to close the game out. The inclusion of 4x Spellshield: Arcane is interesting, as it was probably a highly effective card not only in Rai mirrors, but against the Fire Lorraine decks that are throwing much larger individual attacks than their Wind counterparts. 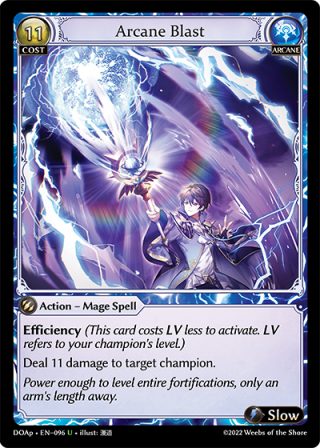 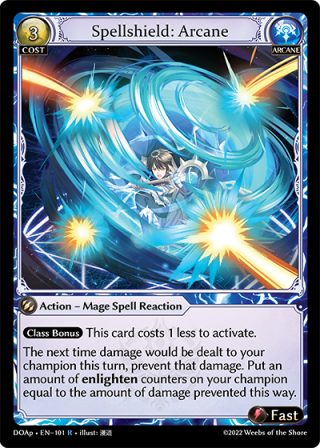 The Wind version of Rai is largely thought of as the weakest current build in the Dawn of Ashes: Prelude meta, but that doesn’t stop plucky players like Zynvolt from trying to make it work anyway! Their build follows a lot of the same Arcane patterns as the Fire build above, but its methods of holding off the opponent are more focused on repeated use of allies like Dream Fairy and generating tempo through bounce effects as you slowly level.

The biggest downfall of the Wind variant compared to Fire is usually just having far fewer puzzle pieces in the deck that can create a combo-kill turn – you are much more reliant on drawing specifically Arcane Blast to get enough damage down to finish the opponent off and generally accrue less incidental damage on the opponent in the earlier stages of the game. Zynvolt notes this as well – one of their issues was having a difficult time in Rai matchups where their Ally control can’t instead be directed at the opponent like a Fire build often can. A good deck builder who can either solve or discover an advantage to make up for those drawbacks may yet crack the code on Wind Rai in these early, pre-full-release stages of the game!

Any of these decklists could be an excellent starting place for your next deck, and at Maindeck, we are all highly anticipating the full release of Grand Archive TCG set 1 – Dawn of Ashes – later this year, which will bring us the Water element to build around, as well as two more classes – Tamer and Assassin – alternate level 3s, Lineage Break level 2s, and so much more!

With that, our first League is in the books and we’ve got plenty more coming, both for Grand Archive and other games! If you haven’t yet, consider joining our Discord so you can keep up on the event schedule and chat with the community. Hope to see you there!